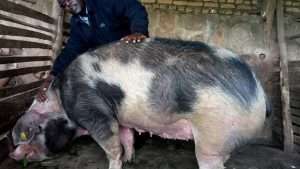 Africa swine fever (ASF) outbreak has been recorded in the Western Region, raising fears of a possible threat to government’s Rearing for Food and Jobs programme in the region.

Clinical tests conducted on pig carcasses in the Sekondi Takoradi Metropolis and the Effia-Kwesimentsim Municipality found the presence the virus which is the causative agent of African swine fever in the domestic pigs.

The ASF virus causes a haemorrhagic fever with high mortality rates in domestic pigs, but expert say it is not a threat to human health as it does not infect humans.

A statement issued by the Western Regional Directorate of Agriculture said “samples of dead pigs (carcasses) sent to the National Veterinary Laboratory for analysis has confirmed positive” of ASF.

Under the Rearing for Food and Jobs, government provided pigs to the Western Region, but on the back of the Africa swine fever outbreak, the Directorate has appealed for a replacement of the pigs with sheep and goats.

It explained “it will take a long time to eradicate the disease”.