Afenyo-Markin says he’s not been hospitalized for Covid-19

Member of Parliament for Effutu Constituency in the Central Region Alexander Kwamina Afenyo-Markin has denied news publications that claimed he has contracted coronavirus and was on admission.

Other government officials including the Minister for Regional Reorganisation and Development, Dan Botwe, and Education Minister Matthew Opoku Prempeh were said to have also contracted the virus.

3news.com is, however, able to confirm that Dr Opoku Prempeh is currently on self-isolation at the University of Ghana Medical Centre (UGMC) on suspicion that he may have contracted the virus.

In the case of lawyer Afenyo-Markin, the publication appears to be false as he describes it as “unfortunate”, observing that he has become a target of the media house which first broke the news.

He explained that he has been in Winneba the past few days and was at the Winneba High Court on Monday and Tuesday.

The Facebook live video showed that he had just finished another court session Wednesday and decided to clarify the matter from the forecourt of the court.

Mr. Afenyo said he will not sue the media house in question but would wish that they do the needful in subsequent publications.

He mentioned he will be in Parliament later in the day. 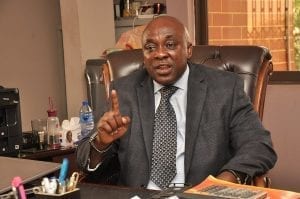 A Deputy Minister of Trade and Industry, Carlos Kingsley Ahenkorah, who is also Member of Parliament for Tema West Constituency,...