Tazaa was arrested while on his way to supply ‘wee’ to his clients in Wa[/caption] Police in the Sawla-Tuna-Kalba District of the Savannah Region have arrested a 49-year-old Dong Tazaa for allegedly transporting substances suspected to be Indian hemp. The substances, wrapped in 15 black polyethylene bags, were concealed in two travelling bags in a vehicle he was travelling in. According to the Sawla District Police Commander, ASP De-Graft Adjei, he got a tip-off that someone was transporting substance suspected to be Indian hemp from Tuna towards Wa. Based on the information, he said,  some police personnel were quickly dispatched to the area. He said it was about 12:00 am Tuesday when his men stopped a Samyong vehicle with registration number WR 4533-11 at Yipala and a search conducted on it by the police. “15 wrapped polyethylene bags containing dried leaves suspected to be Indian hemp were found in two ‘potomanto’ travelling bags” he said. [caption id="attachment_134536" align="aligncenter" width="820"] 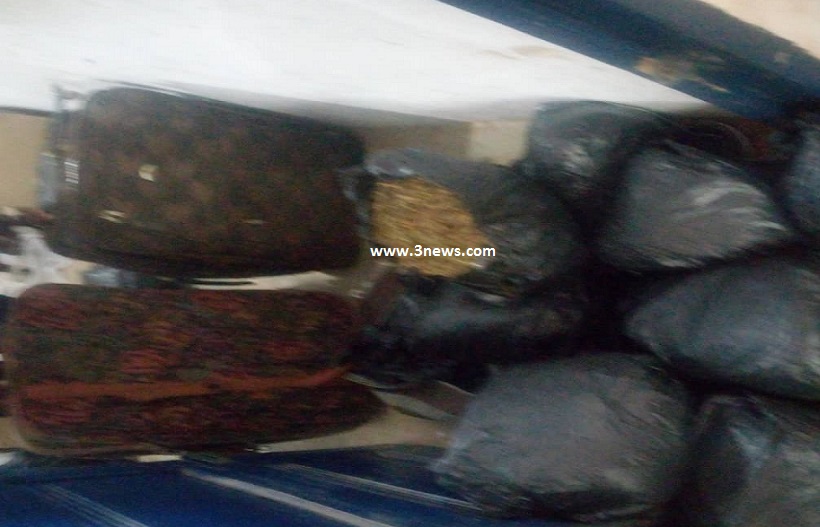 Some of the suspected wee[/caption] When the police asked for the owner of the bags, Dong Tazaa owned up. He was then arrested. During interrogation, he admitted to having been transporting the substance to supply his customers at Wa. “He said he has been in the business for two years as a supplier of the substance in that area” ASP De-Graft told 3news.com. The substance has been sent to Accra for forensic test. Meanwhile, the Bole District court presided over by Mr Prince Andrew Kudjo, has remanded the suspect Dong Tazaa into prison custody to reappear on September 19.

Galamsey: Aisha Huang’s son, one other charged with immigration offenses

Anas denies extorting money, dares critics to sue him if he has done that

Nat’l Cathedral: Govt forced to do right thing by capturing GHS80m in 2023 budget for approval – Ablakwa

Akufo-Addo visits Black Stars in Qatar ahead of Portugal opener

Ministry of Sports, Ghana Mission in Qatar mobilise over 1000 fans...