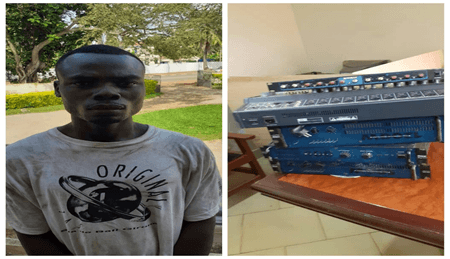 A 23-year-old driver, who had specialized in stealing musical instruments from churches in Kumasi, has been sentenced to three years imprisonment by the Kumasi Metropolitan Assembly (KMA) Circuit Court.

Kwame Owusu is said to be part of a syndicate which have been stealing instruments from churches in Kwadaso, Ohwimase and Patase in the Kwadaso Municipal and Kumasi Metropolis.

He pleaded guilty to the charges and was convicted on his own plea by the Court presided over by Mrs Mary Nsenkyire.

His two accomplices, identified only as ‘Kobby’ and ‘Striker’, are on the run and the police are looking for them.

Chief Superintendent Reverend Andane Ameyaw, told the Court that the police had in recent times received several complaints from churches in those areas about the rampant stealing of their musical instruments and the police had subsequently mounted surveillance in the areas.

He said on October 20 this year, at about 3:30am, the convict together with his accomplices broke into some churches in the communities and stole their musical instruments.

The prosecutor said the convict was arrested upon a tip-off and in his caution statement admitted the offence and was therefore, charged and brought before the Court.

We will not disappoint you in future – Minority assures NDC supporters

UK ‘to cut aid to Syria and African countries’

We will not disappoint you in future – Minority assures NDC supporters

UK ‘to cut aid to Syria and African countries’