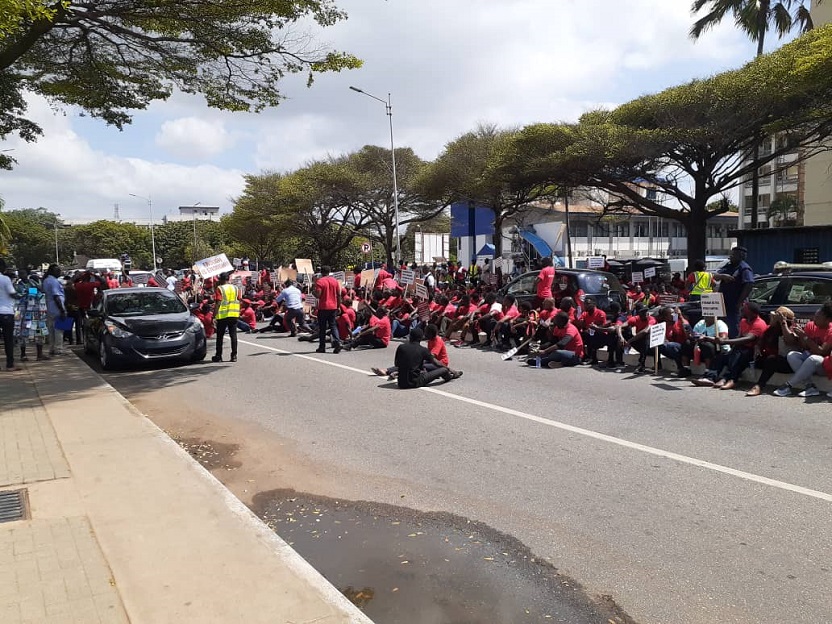 The Accra Regional Police Command says it has released all the 13 persons who were arrested on 7th October, 2019 for embarking on an “illegal demonstration”. They were part of a group numbering about 300, largely students who failed the entrance exams to the Ghana School of Law. The students besieged the entrance to the law school, sat down in the middle of the road, which the police said prevented a free flow of traffic. The demonstrators later continued to the Attorney General’s Department where the police said prevented a Deputy Minister of Justice, Godfred Dame from exiting the premises. Later the group re-assembled close to the new court complex in Accra and picketed there for some time and went ahead to an office close to Ghana Institute of Journalism where they presented a copy of their petition to the Bar Association. “They then headed towards Jubilee House and on reaching King Tackie Tawiah overpass, they sat in the middle of the road and pelted the Police with stones and offensive weapons. In the process, police sprayed cold water and fired rubber bullets to disperse the crowd,” the police narrated in a statement. “Police encourages the public that while citizens have the right to demonstrate, they must do so in accordance with the law. That requires potential demonstrators to furnish the Police with a notice at least five (5) days to the planned date (which was not observed in this instance). “Demonstrators are also encouraged to co-operate with the police on route management and the conduct of demonstrations in order not to inconvenience other members of the public. In the absence of these police may be required to restore order by means of reasonable lawful force.” But President of the Students Representative Council of the Ghana School of Law, Jonathan Alua, told TV3 the police were notified “10 clear days ahead” of Monday’s protest. Though the police statement did not mention charges preferred against those that were arrested, he said he and his colleagues were charged with unlawful assembly and disturbing public peace. Meanwhile, lawyer Gabby Otchere-Darko has condemned the way and manner the police treated the demonstrators after videos emerged of police personnel applying force to quell the demonstrators. He said what the police did was a “Harmful over-reaction against harmless but aggrieved students. I’m disgusted!”

Perception of loss of confidence in the judiciary is real –...

News of diversion of $100m oil cash for unapproved spending is...